An apartment project the developer hopes will become a model for urban, attainably priced housing around the country will begin construction in Tempe soon and will include redeveloping an office parking lot into a 129-unit apartment complex.

The project, called Dwell: A Work @ Home Community, will be built on a two-acre site at Fifth Street and Farmer Avenue. The site has an existing surface parking lot, and previously had some one-story buildings that have been demolished. The parking lot is used for the existing office buildings, which will remain on the site adjacent to the new apartment complex. 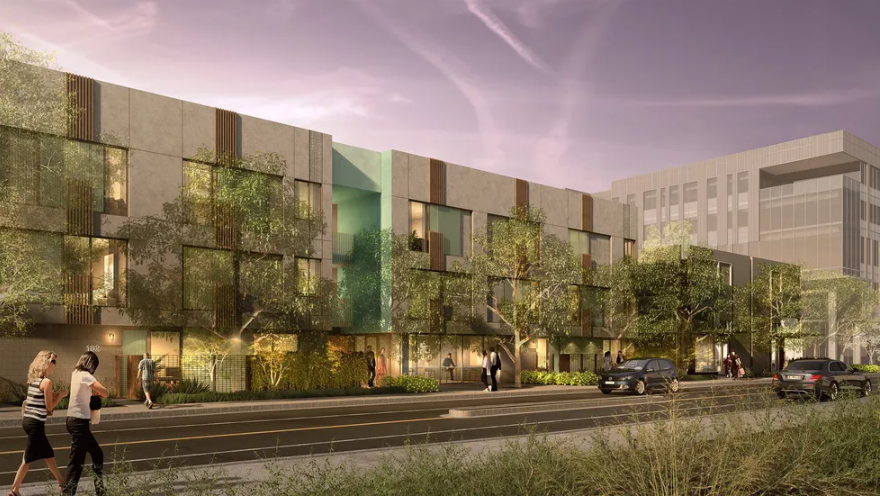 Attainable housing in an expensive area

The apartments will be priced to be affordable for people earning between 80% and 120% of the area median income. Housing is generally considered affordable if a person does not spend more than one-third of their income on it.

According to Rentcafe data, the average rent in Tempe is about $1,919 per month.

“I am so excited about being able to work through the Rubik’s Cube of creating attainably priced housing in an urban setting,” Steve Betts, managing director of development for Holualoa Cos., the developer of the project, said. “It is incredibly expensive to do it in an urban environment, but if you can find an office building with surface parking, you can do a shared parking model.”

The new buildings will be on a “podium” above the existing parking lot. Residents of the apartments and office employees will both use the parking lot, which Betts said can work because offices demand more parking during the day, when apartments need it at night. Construction will take about 18 months.

“It really only works in urban environments with high walkability, but we’ve figured out how to do it at a price point that makes sense,” Betts said.

Read More (subscriber content)
Some stories may only appear as partial reprints because of publisher restrictions.