NOW is the time to TAKE ACTION! Senate to act on the tax reform legislation

If you have not done so already, it is more critical than ever to take part in the NAR “Call for Action”, which will continue until the Senate acts on the Tax Reform legislation.  The House of Representatives passed H.R. 1, the Tax Cut and Jobs Act, early Thursday, Nov.16, in a final vote of 227-205 with two members not voting.  Meanwhile, NAR’s opposition to the Senate proposal remains unchanged. 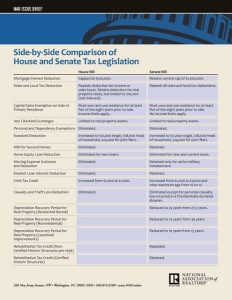 For additional information on this and other legislative issues, visit www.REALTORActionCenter.com